Brahmaputra and the temples of doom 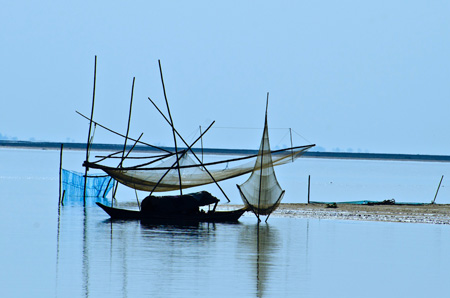 The boat lurched dangerously. A sudden change in the water current slapped us around for a few minutes, and the river began rising rapidly, unexpectedly. There were no clouds in the sky, no signs of an impending storm, no radio reports of rains upcountry. In fact the weather forecast promised a clear and sunny day in the entire region when we began our journey upriver in the morning.

“These days the Brahmaputra needs no rain, rhyme or reason to swell suddenly like this,” says Jadav Payeng, aka Mulai, a Mishing cowherd now famous as the Forestman of Assam. “As if the deadly floods caused by the monsoon downpour between June and September every year are not enough, since the last few years we have seen floods in the  Brahmaputra, with or without rains -- in summer, monsoon, winter. It is like someone is controlling the water flow but is not very good at it. I am certain the dam-building activity upstream is responsible, either dams in Arunachal Pradesh or Tibet, with Indian or Chinese  control. Whoever is responsible is blind. They don't know what they are doing to the thousands-of-years-old civilisation and still undiscovered biodiversity wealth downstream.”

He exchanges a quick, decisive glance with the other oarsmen and changes the course of the boat to drift back to the northern bank where we will wait on higher land till this bout of unseasonal flood passes. Jadav Payeng has lived on the river all his life; he criss-crosses it every day to go to his home island Aruna Sapori, where he single-handedly planted a 1,360-acre forest over 30 years, now named the Mulai Kathoni after him. He has observed the cycle of floods and erosion of the tempestuous Brahmaputra from close quarters. His forest, like so many others along the river, has been sustained by these seasonal, life-giving floods of the river and its many tributaries.

Continue reading on Infochangeindia
Posted by SHAILENDRA YASHWANT No comments: