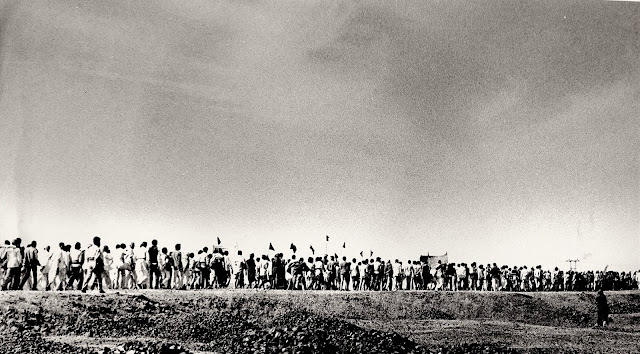 To mark 30 years of Narmada Bachao Andolan (NBA)'s resistance to the hydro dam projects in the Narmada valley, I dug up this image of the Narmada Jan Vikas Sangharsh Yatra of December 1990, that first appeared on the front page of the now defunct 'The Independent', that was launched and edited (for a very short time) by Vinod Mehta.
I was assigned to cover the week-long march and joined thousands of anti-dam protestors led by Baba Amte and Medha Patkar on their march from Barwani in Madhya Pradesh to Ferkuva on the Madhya Pradesh–Gujarat border.

This is where I first met activists like Medha Patkar, Shripad Dharmadhikary, Rohit Prajapati, Himanshu Thakkar, Arundhati Dhuru, Simantini Dhuru, Alok Agarwal, Ashish Kothari, to name only a few of so many more in the following years, who have shaped and influenced my understanding of the greatest people's movement for environmental justice in modern India.

25 years later, the people’s demands for suitable rehabilitation have not been met and neither has the promise of delivery of Narmada waters to the villages of Kutch, but worst of all no lessons have been learnt and the people have come together again to save their homes, villages and forests. "Narmada ki ghati me ab ladai jaari hai" - The slogan I heard first time on this march is ringing again in the valley since last week.

In August 1993 I posted this report for Frontline Magazine- Manibeli's woes .