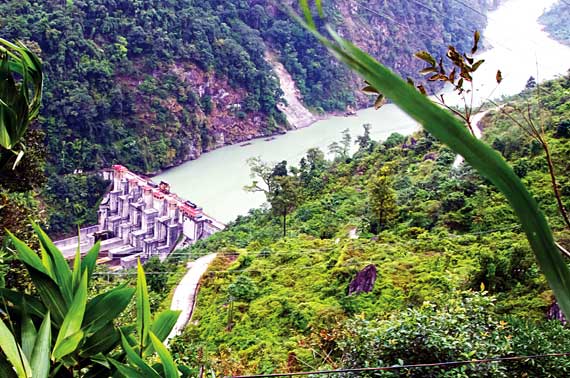 As we wound our way up and down the steep roads of the Himalayan landscape and crossed the Teesta river to enter Dzongu, my host, Gyatso Lepcha, stopped his four-wheel drive in front of yet another boulder blocking our road, a result of the landslides that still shake the mountainside since the earthquake. Far away, towards the west, hidden behind the mist and clouds was Khangchendzonga, the third highest peak in the world and the guardian deity of the Lepcha people who believe they were created to protect and worship the peak. Dzongu extends across a mere 78 sq. km. geographical area. Its vertical terrain, rising from 700 m. to 6,000 m. above mean sea level, is a diverse, snowy, mountainous landscape with steep valleys, narrow gorges and flanking slopes clothed in dense forest. Three climatic zones prevail in this natural wonderland – tropical, temperate and alpine, each with its distinctive ecological touch. Bordering the Khangchendzonga National Park, Dzongu straddles the Himalayan and Indo-Myanmar biodiversity hotspots, that host many endemic vertebrate and invertebrate species, it is also home to about 4,000 Lepchas, the only residents of Dzongu. Outsiders, even from within Sikkim, need a permit to enter. Predictably, there were many ‘outsiders’ at the district administration office applying for a permit at Mangan, the last checkpoint before you enter north Sikkim. The majority were workers from the plains in their white hats, orange trucks, red bulldozers and yellow earth-movers, headed for the Panang-Panan Hydropower-project site. Outside the buzz was about the crores of rupees from the Central Indian Government and the millions of dollars from the World Bank earmarked for the state in the aftermath of the September 2011 earthquake.