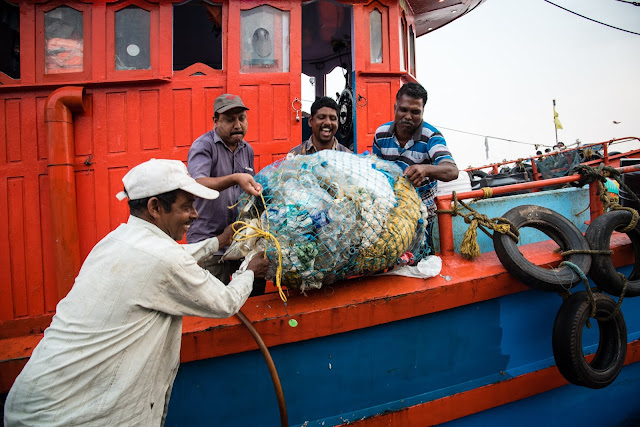 he early morning bustle at Sakthikulangara harbour in Kollam is much like any other on Kerala’s coast. Thousands of tonnes of fish landed by hundreds of boats are being sorted, cleaned and auctioned. But something novel is happening. Each vessel is offloading salvaged waste that crews disentangle from their nets. The plastic will be mixed with bitumen to make roads.

Our appeal to people is to stop using and discarding plastic like there is no tomorrow.

Peter Mathias, president of the All Kerala Fishing Boat Operators Association, says the fishers pledged to bring back the waste from their operations and whatever is caught in the nets.

The plastic waste is then collected by Suchitwa Sagaram (Clean Seas), a Kerala government initiative launched in 2017, and cleaned and shredded  in a special facility. Suchitwa Mission, Kerala’s flagship waste management programme, helped pay for the shredding machine and six months of costs.

“More and more road contractors are shying away from using the waste material, citing technical difficulties in melting and mixing it with their road-building material,” says Sudhakaran, the coordinator of the programme in Kollam. “We need to think about other alternatives to recycle the shredded waste.”

Are plastic roads a dead end?

It was after a series of pilot projects in Chennai that a number of Indian cities and villages began blending roads out of 92% bitumen and 8% recycled plastic.

Clean Kerala Company (CKS) sources and distributes shredded plastics for road building. So far 15 tonnes of plastic shreds have made it into about nine kilometres of road across the state, mostly for short stretches inside villages. About 1.7 metric tonnes of plastic is needed per kilometre.

Advocates claim that roads built with plastic waste are more resilient to searing heat, but environmentalists have raised concerns. They point to the release of highly toxic dioxins when the plastic is melted, and the risk of leaching and bioaccumulation of microplastics in soil, especially on poorly build roads.

“There is scant research on this aspect, hence it would be wise to take a precautionary approach before adopting such technologies on a large scale,” says Dharmesh Shah of Global Alliance Against Incineration.

Plastic roads may not be economic as it is expensive to separate polymers suitable for road construction from a mix of several. (The Indian Roads Congress only recommend polyurethane, polyethylene terephthalate and low- and high-density polyethylene.)

“We have to clean the oceans. We have to find a solution to the garbage. So far plastic roads are the only available option,” says Abhilash Pillai, assistant engineer of the local government’s Harbour Engineering Department, Kollam. “There is no limit to the plastic waste out there in the seas, on the land. We have a huge task ahead and it’s an emergency.”

“Plastic roads are not a solution,” says Shibu Nair of NGO Thanal, who has spearheaded the zero-waste movement in Kerala for almost two decades. “You are hiding your plastic waste for some time and converting all your roads into toxic land.”

He says that neither the Harbour Engineering Department nor the Fisheries Department have a clear institutional mechanism to manage and protect the environment. “That is why the programme is running on an ad hoc basis,” he says. “We cannot leave those fishermen and women to market forces.”

“If plastic roads are going to be an environmental problem in the future then we need another solution,” says Peter Mathias. “Our fishermen are underwriting the clean-up operations. We desperately need fresh ideas and an infusion of funds for this programme to make a difference.”

Without funds and new markets for the salvaged plastic waste, the fate of this pioneering programme in Kollam hangs in the balance, as do ambitious plans to expand it to other ports.

The cost of plastics

Kerala Suchitwa Mission estimates that the state produces 480 tonnes of plastic waste per day. Some of this finds its way into rivers and into the sea.

A UN Environment Programme study found that 311 million tonnes of plastic was produced globally in 2014. It estimated that in 2010, 4.8 to 12.7 million metric tonnes found its way into the ocean. Sunlight then degrades it into microplastics that are mistaken for food by aquatic life and seabirds, damaging internal organs. Millions of birds, turtles, fish and other species are affected.

“Even if every plastic ban on the planet was fully successful, we still have millions of tonnes of historical waste that needs to be dealt with safely and permanently. Unfortunately, all the current practices – poorly regulated landfills, waste-to-energy plants, recycling plastic into pellets, plastic roads etc – all have failed and will lead to more harm than help,” says Shibu Nair.

To end the cycle of plastic pollution for good, the recycling industry is focusing on upcycling, prevention and interception of microplastics, as well as negating the need for plastic – such as by using corn starch or hemp for packaging.

“We hope that the next generation will completely reject plastics and find a new alternative,” says Shiny S, an employee of Clean Seas at the Kollam harbour. “For now, our appeal to people is to stop using and discarding plastic like there is no tomorrow.”