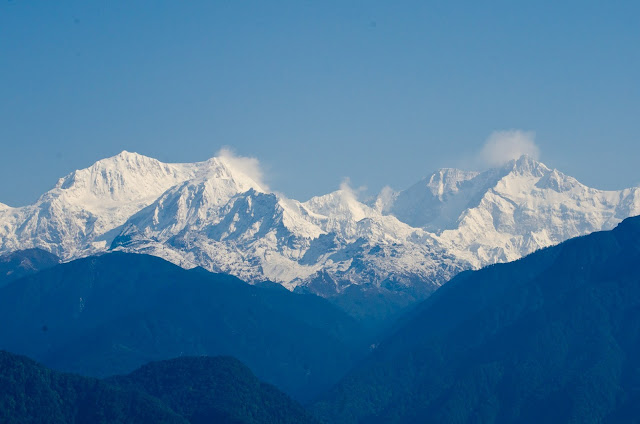 Lorded over by the mighty and most sacred Mount Khangchendzonga, the third highest peak  (8,586 m)  in the world, Yuksom at 1,780m sits comfortably at the ankles of the great mountain, nestled in forests of broad-leaved oak, birch, maple, chestnut, magnolia, rhododendron, silver fir, ash and alder trees. Yuksom, in Lepcha language means the meeting place of three learned monks, who chose the first king, the Chogyal, to establish the Buddhist kingdom of Sikkim. Yuksom was the first capital of Sikkim and the village is an important historical destination littered with 17th-century ruins and some of the earliest Buddhist gompas of the region blessed by the great Rinpoche aka Guru Padmasambhava.

For almost two centuries, the people of Yuksom -- the Lepchas and Limboos (hunter-gatherers and shifting cultivators), the Bhutias (a trading community), the Chhetris and Bahuns (agro-pastoralists) and the Gurungs and Mangers (shepherds) -- recently converted to Buddhism, led a peaceful life mainly engaged in cultivating large cardamom and vegetables, rearing livestock and practising Tantric Buddhism in the shadow of the great mountain.

Continue reading on Infochangeindia.org
Posted by SHAILENDRA YASHWANT No comments:

Kaziranga -Is this a big five graveyard?

Crack of dawn, Kaziranga National Park. I am waiting for the rhinos to wake up and get on with their business of wallowing in mud before they launch into their daylong feeding mode. An elephant herd emerges from the tall grass and trundles towards a ‘bheel’ beyond the swamp we were watching. Sitting quietly in the jeep we watch the majestic creatures pass. Soon enough a lone rhino appears, and waddles to the swamp and settles down with a splash, momentarily spooking a hog deer and a wild pig. A gaggle of Bar-headed Geese flying towards us is cut off by a lone eagle swooping down into the grass between the wild pigs, swamp deer and wild buffaloes to grab unseen prey. 02Somewhere behind me is the mighty Brahmaputra and stretching in front of me, beyond National Highway (NH) 37, loom the Karbi Anglong hills.

I spot pugmarks in the jeep tracks ahead of us. As we edge closer, Gopalnath, the forest guard accompanying us, mutters “tiger”. A chital alarm call not far from us confirms the cat’s presence. The thrill of sensing a tiger before seeing one is still the best part of forest time in my book. After waiting a while, we move on, slowly, senses alert.